According to the last count which was done in 2012 there are approximately 1.159,000 cats in Sweden. This represents a decrease of eight percent compared to the count that was done in 2006. 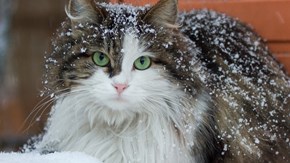 Almost 70 percent of the cats live in families without children. This is an increase of five percent since 2006. There is a trend that the number of cats are declining in the big cities.

The health status of cats in Sweden regarding infectious diseases is generally good. The National Veterinary Institute publishes every year a report on the surveillance activities carried out in Sweden during the past year, for animal diseases and zoonotic agents in humans, food, feed and animals.

The Swedish Board of Agriculture publishes an annual report on notifiable diseases of animals.

Regarding antibiotic resistance and antibiotic consumption in both human and veterinary medicine Sweden is still in a good situation. The Swedres-Svarm report is an integrated report from the Public Health Agency of Sweden and the National Veterinary Institute.

Swedish pet owners have a long tradition of buying veterinary care insurances for their pets. Almost 36 percent of the cats in Sweden have a veterinary care insurance. Insurance data covering the period 2009–2013 from the biggest animal insurance company in Sweden, Agria Djurförsäkring, shows that the five most common diagnosis for domestic short hair cats (DHS) getting veterinary attention are traumatic injuries of the skin, gastrointestinal complaints, skin abscesses, anorexia and lower urinary tract problems. For pedigree cats the most common diagnosis are gastrointestinal complaints, anorexia, upper and lower urinary tract problems and traumatic injuries of the skin.