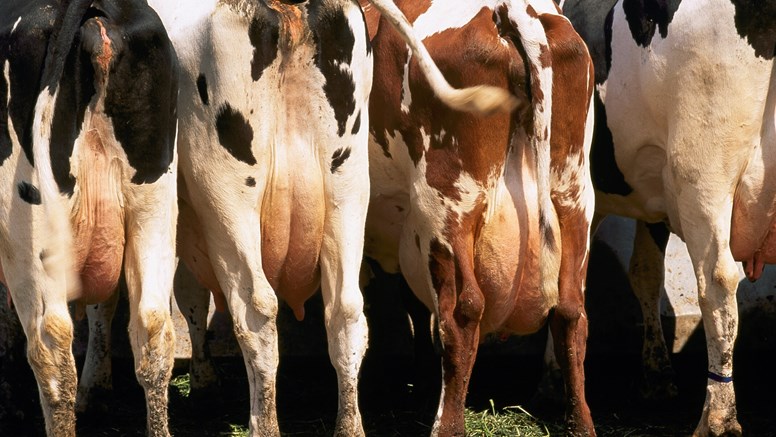 Material and methods: In the first part, 1 597 dairy herds enrolled in the Swedish official milk recording scheme (SOMRS) with at least 10 PC per year during 2014-2016 were included. Herd and cow data were collected from the SOMRS. Each PC was assigned a CSCC category (low-low (LL), low-high (LH), high-high (HH), high-low (HL) or inconclusive) based on the CSCC at the first two milk recordings after calving using the following cut-offs; ≤75 000 cells/ml was considered low and >100 000 cells/ml was considered high (CSCC in-between = inconclusive). Associations between CSCC categories and breed or sire of the PC were analysed using multivariable multinomial logistic regression models. Associations at herd level between number of PC in a CSCC category and herd variables were analysed using multivariable Poisson or negative binomial regression models.

In the second part, a retrospective observational study was performed in 170 Swedish dairy herds. All herds in the SOMRS having at least 60 cows per year, production data from 3 years in a row and at least 10 PC per year were eligible. Based on the CSCC at the first two milk recordings the proportions of PC in each herd belonging to the categories LL, HL and HH were calculated. Then, herds having above median proportion of LL, HL or HH cows during the first year of a 3-year selection period, and above the third quartile proportion of LL, HL or HH cows, respectively, during the second and third year were identified. These herds (LL herds: n = 129; HL herds: n = 92; HH herds: n = 139) were contacted until a maximum of 60 herds per category had accepted to participate. Specially trained field technicians/veterinarians visited each herd once in mid to late indoor season to retrieve information about housing and management of the heifers from birth to calving using a pre-formed questionnaire. At the herd visit, a second questionnaire on general attitudes to udder health was given to the farmer to fill in and send to SVA. Additional cow and herd data were retrieved from the SOMRS. Associations between herd category (LL, HL, HH) and variables collected were analyzed in 8 multivariable multinomial logistic regression sub-models covering herd characteristics, milk-fed calves, heifers in early pregnancy, heifers in late pregnancy, calving and colostrum period, miscellaneous factors, summarized heifer housing data, and general health, culling and fertility data. A final multivariable model was built based on results in sub-models and univariable analyses. The answers from the questionnaire on attitudes to udder health were presented descriptively and differences between herd categories were evaluated using univariable analyses.

Herds in the second part of the study that had accepted to participate and had 100-250 cows were asked to participate in a special study (part 3). The aim was to include 15 herds per herd category LL, HL and HH. Those herds were asked to take aseptic udder quarter milk samples within 24 h after calving and day 3-4 after calving from at least 50% of their PC evenly spread over a 12 month-period. Milk samples were frozen at the farm and sent to SVA in batches for bacteriological culturing. These herds also got two extra visits (spring and late autumn) by the technician/ veterinarian, when animals were scored for hygiene and swab samples of the skin of the udder/teats were taken using sterile, moist cloths. The samples were sent chilled to SVA for bacteriological examination. Bacterial isolates from cases of intra-mammary infections and isolates of staphylococci and streptococci from skin swab samples were frozen. Later, a selection of isolates was genotyped by whole genome sequencing.

Results: In the first part, the annual proportions of CSCC categories for all PC were 51.3%, 5.5%, 15.5%, 13.7%, and 14.0% for the LL, LH, HL, HH and inconclusive categories, respectively. The distribution within each CSCC category varied markedly between herds. Overall, the median herd prevalence was 50.2 - 54.2% and 11.7 - 13.2% per year for the LL and HH categories, respectively. At cow level, both breed and sire were significantly associated with CSCC categories, showing for example that a higher proportion of Jersey PC were categorized as HH compared to Swedish Holstein (SH) and Swedish Red (SR) PC, and that PC of certain SH and SR sires more often were in the LL or HH category of cows than PC of other sires within each breed. In addition, the risk to be categorized as a LH, HL, or HH cow increased with increasing age at calving. All herd factors, except conventional/organic production were significantly associated with the proportion of PC in a CSCC category at herd level. For example, the proportion of PC in the LL category was significantly lower in larger herds (≥80 cows) compared to smaller herds (<80 cows) and significantly lower in AMS herds than in herds with other milking systems, but significantly higher in herds with higher milk production.

In the second part, the final model found that having a standard operating procedure (SOP) for colostrum feeding was more common in LL and HL herds than in HH herds, that the mean bulk milk SCC and overall culling rate due to udder health was higher in HH herds than in LL and HL herds, and that automatic milking was less common in LL herds than in HL and HH herds. In addition, the following herd and management variables differed between herd categories in the sub-models; herd milk yield, age at weaning, having a SOP for feeding of early pregnancy and late pregnancy heifers, farmer observation of teat sucking among heifers in early pregnancy, heifers in late pregnancy spending time with lactating cows before calving, fly control among heifers in late pregnancy, using teat disinfection before calving, time when cow is moved from calving area, milking site during the colostrum period, milking order of primiparous vs. multiparous cows during the colostrum period, restraining at milking during the colostrum period, having a milking order based on udder health, and age at first calving.

The questionnaire on general attitudes to mastitis was answered by 92% of the herds. Differences between herd categories was mainly observed for questions on the udder health of the own herd. For example, LL herds agreed “fully” more often than the other herd categories, with the statement that the SCC of their herd is low. The data also indicate that farmers in HH herds did not consider dirty walkways in the barn as important for poor udder health as farmers in LL herds.

Initially, 41 herds participated in part 3 of the study, but 2 herds were excluded early. Thus, the two extra herd visits (including swab samples of teat/udder skin) were performed in 39 herds. The results did not indicate significant differences between herd categories in observed animal hygiene or in bacterial findings in skin swab samples. Overall, several species of staphylococci were identified in those samples, but Staphylococcus hemolyticus was the most common finding. Among the 39 herds, 14 herds took milk samples from less than 35% of the PC and were excluded from the comparison of milk bacteriology between herd categories. The results from the 25 remaining herds (9 LL, 9 HL, 7 HH) revealed that 14% of 5 593 samples from 730 cows had a specific infection. Such infections were more common in samples from colostrum than in milk samples taken 3-4 d after calving. Overall, S. chromogenes was the most common specific infection (51%) followed by S. aureus (13%). In all, more than 20 different species were identified. Some differences between herd categories were observed. For example, S. simulans was more common in HH than in LL and HL herds, and persistent infections (the same infection at both samplings) were more common in HH than in LL and HL herds. This was mainly due to a higher proportion of udder quarters persistently infected with S. chromogenes. Overall, it was more common that udder quarters infected with S. chromogenes, S. aureus, S. hemolyticus or S. simulans at calving were also infected at day 3-4 after calving compared to having no infection at day 3-4.

Genotypic comparison of milk isolates and skin swab isolates (criteria at least 3 isolates/species/material/herd) was only possible in 6 herds (1 herd S. chromogenes, 5 herds S. hemolyticus). All isolates differed so no associations were found, but the material was small. In addition, a selection of milk isolates (criteria at least 3 isolates/species/herd) was genotyped to study differences between/within herds and within cow. In total 135 isolates of S. chromogenes from 12 herds (5-15/herd; 42 cows with persistent infection), 18 isolates of S. aureus from 3 herds (6/herd; 9 cows with persistent infection) and 24 isolates of S. hemolyticus from 5 herds (3-6/herd; 3 isolates from 1 cow). In short, the genotyping results showed a large variation between herds for all species and a large variation between cows within herds for all species except for S. aureus. Among cows with persistent infection all cows with S. aureus and almost all cows with S. chromogenes had the same genotype at both samplings supporting the categorization of the infection as persistent.