SVA has a central role in keeping the health of the animal population in Sweden. In a globalized world we are constantly at risk of exposure to new disease pathogens carried around the globe through the movement of people and commodities, as well as an increased risk of disease emergence or bioterrorism.

Effective strategies for rapidly detecting diseases are needed to safeguard the health of the Swedish animal and human population.

SVA has developed and implemented a syndromic surveillance system based on various sources of data which can serve as indicators of the health of the animal population in Sweden. 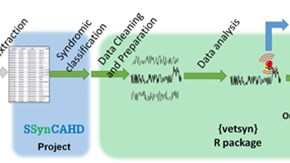 SVA's active role in the research and development of new systems to monitor and quickly detect animal diseases has lead to the development of SVASSS – SVA’s syndromic surveillance system. A syndromic surveillance system is an automated system for real-time monitoring of health data in order to detect, as early as possible, trends or patterns that may indicate a new disease occurrence.

SVASSS monitors all the laboratory submissions sent to SVA by veterinarians across the entire Swedish territory daily, and warns experts at SVA when an abnormal number of submissions, for any animal species, has been detect. SVASSS is the first national veterinary syndromic surveillance system to be fully implemented and active, covering all animal species.

As an expert and research organization, SVA is also concerned with disseminating knowledge and help the development of systems to protect the health of animal populations around the world. To learn more, visit datadrivensurveillance.org.