Salmonella as a zoonosis

Infection with salmonella is one of our most common and important zoonoses (zoonosis = disease or infection that can spread between animals and humans). 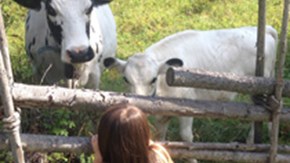 Salmonella passes from animals to humans, and the other way around. Photo: SVA

Salmonella can be transmitted both from animals to humans and vice versa. The route of infection from animals to humans is usually through contaminated food. Thanks to the Swedish salmonella control, Swedish food products of animal origin, such as meat and eggs, are generally free from salmonella. There are only a few outbreaks of salmonella in food-producing animals in Sweden every year. About 4,000 cases of salmonella are reported in humans annually. Of these, 550-800 have been infected in Sweden, but the majority were infected abroad. In many countries outside Scandinavia salmonella is common in animals, and thus in food of animal origin. Vegetables can be contaminated with salmonella from manure used for fertilization. Some food of animal origin is sampled prior to entry to Sweden*. Despite this, in most salmonella outbreaks reported in Sweden the infection could be traced to imported food.

*Samples for salmonella controls are taken in the country of origin or at import of fresh, chilled and frozen meat from beef, pigs and poultry and eggs from EU countries.

Contaminated food of animal origin such as meat and eggs, or of vegetable origin such as lettuce and other leafy vegetables, sprouts, spices and seeds, are all sources of infection. Another source of infection is contact with infected humans or animals (especially reptiles and small birds).

Everyone is, in principle, susceptible to infection. However children, elders, and people with impaired immune systems are more sensitive.

The infectious dose is relatively high; up to 100,000 bacteria are usually required for an otherwise healthy adult with normal immune status to become ill. A prerequisite for the bacteria to reach an infective dose is often to reproduce in foodstuffs.  A considerably smaller quantity of bacteria can make children, elders, or sensitive individuals sick. The infectious dose also depends on the characteristics of the bacterial strain.

Acute abdominal pain, diarrhoea, nausea, fever, and sometimes vomiting. Mild symptoms are often seen and the infection can also pass without symptoms. Deaths are rare. Sometimes as a secondary complication to the infection a reactive arthritis, an immunological reaction that gives joint pain and fever, can occur.

This is the period during which salmonella is excreted, regardless of whether the person is sick or not. It usually lasts about 4–6 weeks but may sometimes be several months to years. The bacterium is excreted intermittently.

As a result of the Swedish salmonella control program, the whole food chain in Sweden from farm to fork is virtually free of salmonella. The control of imported food contributes to minimising the risk for the consumer.

To reduce the risk further it is important to observe good hygiene when handling, producing or preparing food, including adequate heating of meat, eggs and other animal products, and pasteurisation of milk. In addition, good personal hygiene is important after handling reptiles or attending to bird tables, not to mention using toilets.

Information about salmonella infection in humans is also available at the Public Health Agency of Sweden.