Enterohemorrhagic E. coli (EHEC) are verotoxin-producing E. coli (VTEC) that causes disease in humans. Compared to other European countries, EHEC infection is common in the Swedish population. VTEC/EHEC is the subject of intense research efforts at SVA, with the goal of reducing the number of EHEC cases among humans by reducing the spread among animals.

Recent studies at SVA have shown that verotoxin genes are very common in samples from cattle anywhere in Sweden. However, pathogenic VTEC like the serotype O157 are mostly restricted to the southern parts of the country. ”Clade 8”, one of the most aggressive form of O157 in Sweden, is even more restricted in range and mostly occurs in a few smaller hotspot areas. Targeted efforts in these areas, in collaboration between authorities and producers, can perhaps be a cost-effective way to reduce the risk of EHEC infection in the human population. 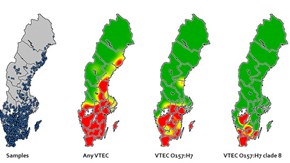 ×
Download original
Distribution maps for VTEC in Sweden (red=present, green=absent), based on a prevalence study performed 2011-2012. The number of samples taken in a region is proportional to the number of cattle. Illustration: Robert Söderlund, Tomas Jinnerot, SVA.

Transmission of VTEC between farms

To determine the VTEC O157 status in the cattle farm environment SVA, Swedish livestock associations and the Swedish University of Agricultural Sciences have performed a longitudinal observational study. The study showed that the status of preceding sampling, season and recent introduction of animals were associated with detecting VTEC O157.

How can we tell which VTEC are dangerous for people?

In collaborations with the Public Health Agency of Sweden we are comparing human and animal isolates of EHEC/VTEC by whole genome sequencing and MLVA. This gives us knowledge for contact tracing and outbreak investigations. Another important goal of comparing isolates of different sources and with different virulence profiles is to try to find out which types of VTEC are likely to cause severe disease. We have evaluated serotype specific markers and verotoxin gene variants and found that many markers believed to be associated with EHEC are in fact very common in samples from cattle and sheep. This means these markers are probably widely distributed among more or less harmless VTEC.

The verotoxin genes of EHEC/VTEC are carried by bacteriophages that can spread the genes to bacteria by transduction. When we look for VTEC in samples from animals we find many strains that resemble typical VTEC, but without any verotoxin genes. In ongoing studies we are investigating the genetic relationship between VTEC and VTEC-like bacteria. We are also testing the susceptibility of VTEC-like bacteria to be transduced by verotoxin-phages and become true VTEC, and studying the tendency for true VTEC to lose their verotoxin genes under laboratory conditions.

Major research projects in recent years have been funded by the Swedish Board of Agriculture and the Swedish Civil Contingencies Agency.